The Five “Why’s” of Leaving Messages

“Ninety percent of all those who fail are not actually defeated. They simply quit.” Paul J. Meyer

So pleased this quote landed in my inbox. While it certainly supports my thoughts on persistence last week, it also applies to this week’s topic – leaving messages.

Over the past decade, and particularly during the last two years, there’s been a slow and subtle shift around phone messages. The change began with the proliferation of answering machines and voicemail, then the addition of call display and now … the reality that it is no longer rude to not return messages.

Not that long ago, if you had received three messages from someone and did not attempt to return their calls, that would have been rude. It was an accepted standard of business behaviour. While there were extenuating circumstances – business travel, health issues, vacation – it was often the case that someone else returned the call – out of politeness – to explain the situation.

Obviously that’s not the world we’re living in any more. As you’ve heard me say more than once – and will likely hear me say again – most of us are simply overwhelmed with email, reports, deadlines, travel … and with phone messages.

Today, not returning calls is not rude – it’s simply a fact of the world we have created which has numerous communication methods and an incredibly hectic pace.

So … does this mean you should stop leaving messages? No – but you do need to change your attitude about them.

1)     When you call someone, your phone number does show up on their call display. A phone number without a message is … rude. Or at the very least, it labels you as a pushy salesperson/telemarketer who isn’t even proud enough of their product/service to leave a message.

2)     For some individuals there is a strong emotional reaction to phone numbers with no message attached. I learned this from a woman in a workshop who shared her experience of getting out of  a violent relationship, leaving her fearful and anxious about calls with no message.

3)     Email is also missing the mark. Inboxes are too full; a message can easily be buried for months. A combination of email and voicemail will offer better odds of being “heard”.

4)     Voicemail messages contain … you! They include the sound of your voice which offers the possibility of relationship. Your words and your tone hold your desire, your interest, your excitement about speaking with the person. This has always been – and will continue to be – motivating for the listener.

5)     Most of us start each day with a to-do list. Many of us have to revise that list several times before the day is done. A voicemail message can, and does, keep you and returning your call on that list … although it may not make the Top Ten as quickly as you’d like.

Second, rather than feel defeated by the fact that your messages are not being returned, change how you view the process. For me, although I still pick up the phone with a clear image that someone’s going to answer (I know, that’s hard to believe, isn’t it – talk about optimistic!), I leave messages because they are part of the communication process, not because I expect them to be returned.

Hearing your voice, knowing you want to reach them, continually and politely contacting them, not taking offence at their inability to return your call … this speaks very loudly about who you are, who you will be to work with, your diligence, persistence and desire to be of service.

Don’t quit leaving messages. Instead, change your understanding of why they contribute to your success.

I’d love to hear your thoughts!

0 thoughts on “The Five “Why’s” of Leaving Messages” 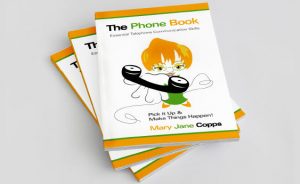