Truth and Reconciliation: A Personal Story 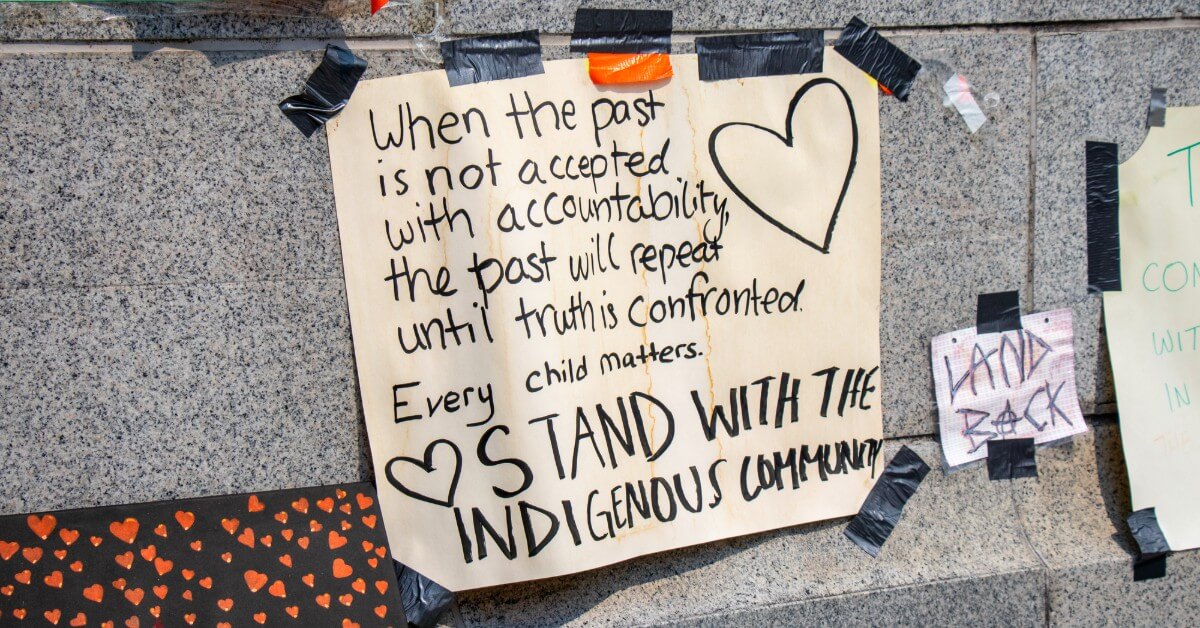 Since bodies were found this past May on the site of a formal residential school in British Columbia, I have been haunted.

You see, it was no surprise to me that these bodies were found, that more were found at another site in June and that many, many more will be discovered in the months and years to come.

It seems to me that I have always known about residential schools. Not because I’m an Indigenous Canadian but because I come from northern Canada, and I was raised and educated as a Catholic.

In honour of our country’s first National Day for Truth and Reconciliation, I want to share with you a story, one that haunts me, one that will always make me wish we had done things differently, that we will do things much differently now.

My hometown is Timmins, Ontario. It lies 225 miles north of North Bay and 183 miles north of Sudbury and is the largest community you’ll find as you proceed north to James Bay.

About 66 miles north of Timmins is Cochrane, Ontario. Here the Ontario Northland Railway operates the Polar Bear Express. Four days per week it takes passengers and freight further north to Moosonee, 12 miles south of James Bay and considered the “Gateway to the Arctic”. (There are no roads to Moosonee; it is accessible only by air and rail.) In a 2011 census, 75.7% of the population identified as First Nations. In 2021, municipal figures state that 85% of the population is Cree.

This bit of Canadian geography informs my story, which takes place around 1962/63. I am either four or five years old. While my memory of specific moments is very clear, some of what I’m about to share with you I’ve pieced together from research, conversations and supposition:

As the youngest of four children, I’m at home with my mother while my sister and two brothers are at school. On this particular day, the front doorbell rings.

This is highly unusual. The front door is reserved for very, very special occasions. It’s curious, it’s exciting. I rush to stand beside my mother as she answers the door.

On the step is our parish priest, Canon Jones, a man I came to know well and admire as I grew up. He is wearing his clerical collar, black hat and black coat.

At first, I’m thrilled, thinking that these children will be friends of mine, that they’ve arrived to play with me. But that is not what their faces tell me.

And this is what haunts me – the look on the face of the boy my age is one of terror. My mother and Canon Jones speak above us as we look at each other and he shares, without words, his tremendous fear and his determination to protect his little brother.

That’s the end of my clear memory.

It was not uncommon for Timmins to become a “station stop” for Indigenous children being moved from James Bay and points north to residential schools across the country. The same would be true during “the Sixties Scoop” when children were taken from their families and placed in non-Indigenous foster homes throughout North America.

I believe that this was a time when children were stuck in Timmins overnight due to transportation issues. Canon Jones had to find them places to stay. My mother would never have said no to such a request from the parish priest.

But my mother, an incredibly intelligent and talented woman, also suffered from severe mental illness. She was capable of frightening and violent behaviour … and this also haunts me. I don’t remember playing with those boys. I don’t remember them at our dining room table or where they slept. I don’t remember saying goodbye.

It’s true that I could do nothing to change what happened to those boys all those years ago. But I can acknowledge, and share with you, that what happened to them, and approximately 150,000 Indigenous children sent to residential schools as well as approximately 20,000 taken from their families as part of the sixties scoop, is my heritage. This is not something I can put in a box and label “long ago decisions by men in power”. This was something my community, my family, sanctioned.

This is why today is so important. Our National Day for Truth and Reconciliation is about owning our past and our present. (Approximately 33 First Nations communities live with water advisories and 73% of First Nations’ water systems are at high or medium risk of contamination.)

It is also about our future. Will our children and grandchildren have memories that haunt them? Or will they be proud of a heritage of change? Will they be able to speak of parents and grandparents who, finally, created a Canada where Indigenous people are respected, their wisdom embraced, their experiences, and the impact of those experiences, fully acknowledged?

It’s up to all of us and today can be a beginning.

4 thoughts on “Truth and Reconciliation: A Personal Story”